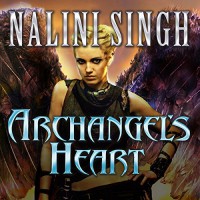 This is a favorite series of mine. I just love it. It is a cross between a paranormal romance and an urban fantasy. The reason I say that is because the first few books all follow a single couple, Elena and Raphael. Then it starts having a different couple with each book, but still goes back to Elena and Raphael every now and then. In this book, we are back with our “main” couple of Elena and Raphael. They spend very little time in New York in this story, so we don’t see many of the other favorites from the book, but we do get some time with Blue Bell and Dimtri.

If you’re not familiar with this series, it features angels, archangels and vampires. There are usually 10 archangels that are alive and awake at any given time, but right now, there are 11 because of the Cascade which is increasing the power of angels and wreaking havoc. These archangels each have their own territory that they rule. Raphael is the archangel of New York and his territory is North America. There are angels underneath the archangel. Angels and Archangels can turn humans into vampires. These vampires have to sign a contract to serve their angel for at least 100 years. The Guild, for which this series is named, will track down vampires who try to skip out on their contract. They also help with rogue vampires and even angels if needed. They are humans. Some are “hunter born” which gives them extra senses to make them extraordinary trackers. Elena was in the Guild, but is now the consort to Raphael, but she still does some stuff with them.

In this story, Raphael and the Cadre, the group of archangels, have been summoned to meet by the only group that can summon the Cadre, the Luminata. Everyone is required to attend or they could lose their territory. Raphael is permitted to bring his consort and a guard. Aodhan, aka Sparkle for his beautifully sparkling wings, is the guard that is chosen to go with them.

This is the first time we’ve heard about the Luminata. They are a very secretive group. They were robes most of the time that even hide their wings. They are seeking perfect luminesces. From the description, they remind me of a group of monks. They are also the collector of the art for the angels. They have an extensive library and art gallery, but because they are so recluse, no one gets to appreciate these treasures.

This was a great addition to the series. I loved the story about Lumia (the stronghold of the Luminata that is located in Morocco). There is also a town outside of Lumia that had a great story with it. I love that we got to learn more about Elena’s ancestors, which we know little about until this point. We also learn more about Aodhan. There’s a reason that he is the way he is (I really hope that he might be the next story *pretty please*). This story was full of suspense, more than we are used to in this series, and lots of politics, which is more common. If I had read the book, I would call it a “page-turner”, but since I listened, I will just say that I was finding reasons to keep listening. I wanted to glue the earbuds into my ears.

I don’t know that I would say that this book had a cliffhanger, but I will say that it left you wanting more. There are some plot threads that are not wrapped up. It does make me wonder if the next book will be another Raphael/Elena book or where the story will go from here. No matter what comes next, I’m really excited to see where the series goes. I love Nalini Singh and the Guild Hunter series (Psy-Changeling too for that matter). If you haven’t tried this series, I highly recommend it.

This is a series that I started off reading and the eventually changed over to listening. Now, I’m a listener only. I just love Justine Eyre’s narration. She does a great job with all the voices. There are so many different personalities in this series and she nails all of them. I love the men and women’s voices, and there are a lot of men’s voices in this series. She does a great job with her pacing, speeding up or slowing down depending on what the scene needs. If you haven’t tried Justine Eyre, I highly recommend her.