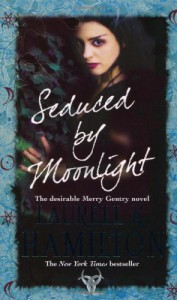 This is another re-listen for me as I prepare for the newest Merry Gentry book, A Shiver of Light, that comes out in early June.

I've been a big fan of Ms. Hamilton for a long time now and have read both series religiously for years.  I've stuck through the Anita Blake series when many walked away.  There are somethings that aren't great, but I like the characters and the overall plot.  I get annoyed with the endless descriptions of characters and their clothing at times.  And yes, the sex can get carried away in the Anita series, not as much in this one, that I remember.

The one think that has always drove me nuts with these books is that the editing could use some work.  When I say that, I don't mean grammar or punctuation.  I mean that the same character in this book has two different names.  Early in the book they refer to him as Whisper.  Later they refer to him as Silence.  It didn't seem to me as if it is two different names like Doyle and Darkness.  It is almost like she forgot what she names him and this isn't the first time that I've noticed this.  I think this is due tot he fact that she pushes deadlines and doesn't give enough time for editing.  I saw on Facebook that she just wrote "The End" a few days ago for a book to be release in early June.  That is four months to edit and publish, which seems extremely short.  I really wish she would take the time to allow more editing to be sure that things less likely to happen.  I know not every book is perfect, but to have two different names in the same book, is a little strange to me.

I love the worlds that Ms. Hamilton has created and I love most of the characters even more.  I just feel when little things like this happen, it pulls me out of the fictional world that is created and takes something out of the story.