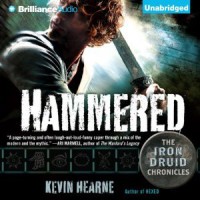 Hammered picks up pretty much where Hexed left off. Atticus must go to Asgard to steal a golden apple for Laksha to settle up a debt from the previous story. Leif wants to go to Asgard to kill Thor and there are many who want to go kill Thor too. It seems that Thor is not the nice guy that we see from Chris Hemsworth in the Marvel movies.

One of the big things that stuck with me was all the stories about each person and why they wanted to kill Thor. There were many and they weren’t good stories. They were well told. I loved listening to each character tell Atticus about how Thor had wronged them. I would want to kill him too, even if he did smile like Chris Hemsworth.

We learn about how Leif because a vampire too. We get to spend time with the werewolf alpha, who has been in previous books but in small pieces. Not to mention the new characters. We also can’t forget the Morrigan. This wouldn’t be an Iron Druids book without her.

Iron Druid Chronicles continues to be a fun urban fantasy series with a very likeable main character and wonderful secondary characters. It has a mix of several different kinds of mythologies including Norse, Greek, Finnish, Christian folklores. Add to that the standard werewolf, vampire, witches and other supernaturals that we are used to seeing, and you get a great group of characters, both good and bad, to choose from. As per usual, it is the humor that I love in this book. Atticus talks about his angel and devil on his shoulders as Spock and Captain Kirk.

Now go and stake some vamps. Especially the sparkly emo ones.

Awesome! I’d just bullied Jesus into doing a shot with me. Nobody would ever believe it, but I didn’t care. We ordered the insanely expensive stuff, seventy-five dollars for a 1.75-ounce pour of premium Irish whiskey, because if you’re doing a shot with Jesus, you don’t buy him scotch.

“Say no more,” Leif interrupted. “I understand. I will simply have to kill them all myself.”
“There he goes again. I’m telling you, Danny Elfman would love to get hold of those lines.”
“Not John Williams?”
“If you’ve got some hopelessly overmatched heroes fighting evil and some Imperial types marching, John Williams is your guy. You need a song to make people reach for a box of Kleenex, talk to Randy Newman. But if you want creepy atmospherics and spine-shivering chords to back up your casual death threats, you gotta bring in Danny Elfman.”

“I see. And who is this author?”
“Neil Fucking Gaiman.”
“His second name is Fucking?”
“No, Leif, that’s the honorary second name all celebrities are given by their fans. It’s not an insult, it’s a huge compliment, and he’s earned it. You’d like him. He dresses all in black like you. Read a couple of his books, and then when you meet him, you’ll squee too.”
Leif found the suggestion distasteful. “I would never behave with so little dignity. Nor would I wish to be confronted in such a manner by anyone else. Vampires inspire screams, not squees. Involuntary urination is common, I grant, but it properly flows from a sense of terror, not an ecstatic sense of hero worship.”