Audiobook Review: The Undoing (Call of Crows #2) by Shelly Laurenston 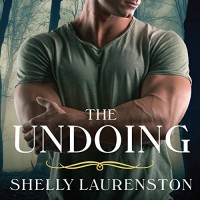 In the first book of the Call of the Crows series, we learned a lot about the Crows and the Ravens. In this second installment, we learn about more of the nine clans that have been chosen by the gods to fight at Ragnarok when the time comes and to try to keep it at bay. Mostly, we learn about the Protectors. They are a group of males who are raised knowing what they are. They served the god Tyr. They had owl-like qualities, including turning their heads 280 degrees, which freaks everyone else out.

This story starts off with a bit of a flashback to Jacinda “Jace” Berisha turning into a Crow. She was the wife of a cult leader who kills her. She awakens while he is burying her. Jace joins in with the Crows. She goes on a berserker rage and attacks him. She becomes an introvert who spends the majority of her time hiding from the others, anywhere from under the house to in the cupboards, to read her books. She also has a very adorable puppy that follows her everywhere.

Danski “Ski” Ericson is a Protector. He lives at their library (how can you not love him already.). It isn’t just any library. Think of one of the best libraries you’ve ever seen. Think the library from Disney’s Beauty and the Beast. The Protectors just acquired some Russian books that they need cataloged, but they don’t have anyone who can speak Russian. So Ski goes to ask Jace who can speak tons of languages (I can’t remember the number or if it is even mentioned. I know they discuss several of the languages that she can speak and how she learned them all). She finally agrees, reluctantly to help them.

There’s a couple of different plot lines in this story. There is the craziness that is the Crows. There is the fact that Jace’s ex-husband is wanting to bring her back into the fold. There is also the matter that in the previous book, a certain god they thought they had killed, is not actually dead. Oh, I can’t forget the books that Jace is translating and her time in the library. I know that sounds like a lot is going on, but it isn’t all crazy. Most of the story revolves around the ex-husband and the god that they fight.

I loved Jace. I think it is mostly because of her love of reading and avoidance of people. As a heavy reader and introvert myself. I can’t help but see a bit of myself in her. I don’t go on berserker rages, but I would love to be able to. I know a few people who I would love to unleash those rages on. Ski is so sweet. I love how much he just wants to see Jace happy. He completely understands that she doesn’t like small talk and doesn’t ask her to do it.

I would be remiss if I didn’t mention the pets. They are adorable. There is Rev, Jace’s puppy. There is also Brodie Hawaii, Kara’s pit bull who was also turned into a crow when Kara was turned. She is quite an interesting character. Then there’s Ski’s cat, Sulka.

Lastly, I should mention Bear, one of the Protectors. He is excessively protective of the books. He cracked me up several times about the books and then again with the puppy. I should also mention that Jace’s grandma is pretty great too. I should also mention that there are a few hints from Shelly Laurenston’s Pride series with Grizzlies and Wild Dog shifters. Don’t worry if you haven’t read them, they’re just some shifters who make an appearance. I would recommend that series though. It is a lot of fun too.

“I’ve got an idea,” Gundo cut in. “Have the Ravens kill your ex-husband.”
“Pardon?”
“It makes complete sense. That way you and society won’t have to worry about him at all.”
“If you’re so worried, why don’t you kill him?”
“Because I’m a Protector,” Gundo patiently explained. “I’ll protect you because that’s we do. But outright murder? That’s a mindless enterprise. Seems much more ravenesque.”
“You just think that the Ravens are stupid.”
“They are stupid.” Erickson muttered.

I really love the narration of Johanna Parker. I think she does a great job with the humor in this series. She does a good job with the different voices for both male and females. I do listen at an increased speed, but that is normal for me. Johanna Parker is one of my favorite narrators when it comes to series that is filled with humor.