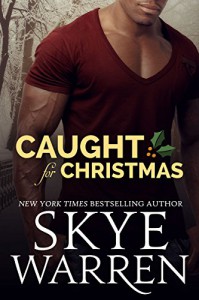 This is a quick read that was a great addition to the Stripped series, though it can be read as a standalone. Bianca is a dancer at the Grand, former strip club, now burlesque club. Her parents have gotten themselves into debt with the mob and have asked her to rob The Grand in order to help them pay of their debt. However, the former owner of The Grand, Ivan, who gave it to the love of his life Candy, is dangerous in his own right.

West is a bouncer at The Grand and has always liked Bianca, but never made a move on her. He is a former marine and known as "the boy scout" because he never bends the rules. He starts to notice that Bianca is acting different. He also notices that she has lost a lot of weight. He is aware the amount of money that the girls of the Grand make, so he knows that she should have the money to afford to feed herself.

When Bianca goes to break into The Grand, West is waiting for her. He has a very interesting punishment for her. He also has every intention of protecting her, not only from the mob, but also from herself and her con artist parents.

Ms. Warren has done another terrific job of telling this story. I love the characters that she writes. They are full of emotion and very well developed, even in the shorter stories like this one. This is still a dark romance, but more dark for the aspects outside of the romance, than the aspects within the romance. This is Christmas novella, but it really takes a backseat to the main part of the story. If you've never tried this series or Ms. Warren, this is a great story to dip your toe into her world, which I love.