Petals and Thorns by Jennifer Paris (aka Jeffe Kennedy) 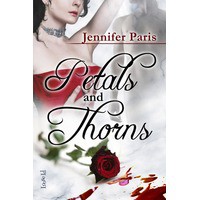 Amarantha is forced to marry the Beast by her father to regain his wealth. If she does not consummate the marriage within seven days, her father gets the wealth returned. Amarantha is allowed to refuse intercourse, but everything else is fair game. And the Beast takes advantage of everything he is allowed. He does not give her a choice in anything but the final act to consummate the marriage.

This story is a very hot BDSM story. Amarantha is taken on a very seductive journey with the Beast. She learns that while the Beast is half man and half monster on the outside, he does have a good heart on the inside. He pushes her boundaries in many ways, but in the end, they are places she ends up enjoying and getting turned on. I think this bothers her more than the acts themselves. I also loved when Amarantha goes into the stable to find her father's horse that he abandoned because he felt she was of no use anymore. This horse thrived in the care of the beast who actually cared for the mare. Also, he makes even riding the horses a sexual torment.