Review: Empire of Night (Age of Legends, #2) by Kelley Armstrong 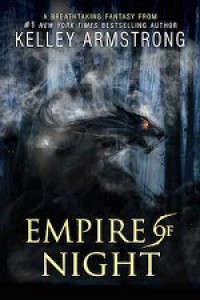 This is an interesting series by Kelley Armstrong, who is one of my favorite authors. I was very intrigued by the first book in this series. This series is about two twin sisters who live in a different world. They are the Keeper and the Seeker, which is a coveted position in their world. They work together to quiet the souls of the dead. They each have a bond beast that is their protector. Moria, the Keeper, has a hound. Ashyn, the Seeker, has a wildcat for her bond beast.

In the previous book, their town is destroyed. They spend the most of the book traveling to the emperor’s palace for help. Now they are almost like prisoners in gilded cages. The emperor won’t let them leave the palace area for their own safety. All the girls want to do help to find the missing children from their village. They really feel helpless sitting in the palace while others are missing.

Gavril is a boy from their village who appears to turn traitor. His father is the one who has started all the issues in the girls’ town of Edgewood. Moria got very close with Gavril in the first book and is having a hard time dealing with the idea that he turned traitor. Moria also has gotten very close with the emperor’s bastard son, Tyrus. She even goes off to help him with negotiations.

Ashyn is the quieter of the two sisters, but she is also powerful, if not as physical. She has interest in Ronan. Ronan is a boy that helped them traverse to emperor’s palace in the first book. He has no status, which makes him like a fugitive, so he is hiding from the emperor. They both have feelings for each other, but Ronan doesn’t feel he is worthy of her.

It is really hard to give you the aspects of the story without giving away spoilers. I will say that I love the premise of this story. I love the characters. I even love the overall story, even if I thought it was a bit long for a young adult story. What I didn’t like was that Moria seems to have gotten herself into a possible love triangle with Gavril and Tyrus. I’m not a fan of love triangles, and I don’t like this one. I’m not a fan of the lack of relationship between Ashyn and Ronan. I didn’t like the excuses. Also, there is a cliffhanger, grrrr. I think this will be a series that I like each book, but I love the entire trilogy.