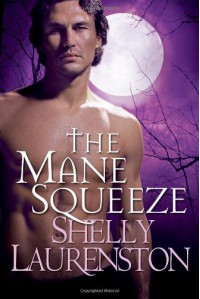 I started this book when there was nothing but horrible stuff going on in the news and I needed something to lift my spirits.  Laurenston didn't disappoint.  This series is a fun, light-hearted, funny and sexy series.  This book might be my favorite in the series so far.

Lachlan “Lock” MacRyrie is a grizzly shifter from Jersey.  He's a bit of a loner, who doesn't like social events. He LOVES honey.  One person called him Paddington and another Baloo to irritate him.  I think the mark was missed because no one called him Pooh, with his obsession with honey.  Oh, and he has every flavor of ice cream available in his freezer, but you can't fault him for that.  I love ice cream.  He is a computer coder for Jessica Ward and loves to woodworking, that doesn't mean whittling.

Gwen O'Neil is a half-breed from Philly.  She is a tigon, half lion, half tiger.  Many of the other breeds have a serious problem with half-breeds.  This is nothing new for Gwen.  Even growing up in her pride with her mother, she never really fit in.  She has one overbearing half-brother and then his overbearing half-brother.  They seem to think she can't take care of herself.  Then, her mother criticizes everything she does. To her, it feels like she can never do anything right.

Gwen reminds me a lot of Sissy, Ronnie and most of the other women we've seen in this series so far, with the exception of Jessie. She is tough, quick with her mouth and doesn't take crap from anyone.  Lock, on the otherhand, is a completely new character.  He is just a loveable teddybear.  I just love him.  He does this thing where he plays with his toes that is just too cute for words. While he has the alpha tendencies of the other males, he has the lovable teddybear side that the other males just don't have.

There is a group of people who not only have issues with half-breeds, they also have personal hatred for Gwen's mother, who is a piece of work.  They try to kill Gwen and her best friend, half wolf and half wild dog, Blayne.  Things get interesting because Lock is a former member of the military.  A group, exclusive to shifters, that scares not only shifters, but SEALs, Marines, etc.  He is not a man to mess with, as lovable as he seems, he is very dangerous.

The narration was wonderful.  Charlotte Kane is able to do many different voices with the different accents. Not sure she got the Philly accent quite right, but it worked for me.  The male voices are done well.  She is also great at keeping the voices consistent from book to book.  I love listening to how she brings out the snarkiness in all the characters.